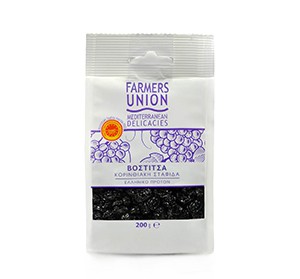 Currant is a natural product made by sun drying the grapes of the Greek vine variety under the scientific name Vitis Vinifera L.

Currant is cultivated in Greece and particularly on the coasts of North and West Peloponnesus as well as the Ionian islands where the soil and climatic conditions thanks to the sea breeze and the sunshine are ideal for the production of a natural product of sublime quality.

Due to its excellent properties, currant has been part of the daily diet since the ancient years. Today, it is consumed as a snack or it is used as an ingredient in cooking, bakery, cake making etc preserving all its nutritious properties.

Depending on the quality, we distinguish the following types of Currants:

The world-renowned Currants under the name "VOSTIZZA" is considered the Currant of the highest quality and its distinctive feature is the excellent aroma and the unique taste. "VOSTIZZA" is exclusively cultivated on the semi-mountainous and mountainous area of Aeghialeia.

ACUA SA exports Currants to almost all over the world; the main markets being the EU member states (particularly the UK and the Netherlands) as well as other countries such as Australia, the USA etc.

Recent studies conducted specifically for the Greek Corinthian Currants from the Agricultural Cooperatives' Union of Aeghion, in collaboration with universities in Greece and abroad, have shown their high nutritional value.

Corinthian currants are an excellent source of antioxidants / polyphenolics (flavonoids, anthocyanins, proanthocyanidins, procyanidins, resveratrol) with high antioxidant content. Corinthian currants have a great advantage over other types of fruit and raisins because they come from black grapes which are considered far more superior than white grape varieties in antioxidants and especially anthocyanin. Drying the grapes is a process done in mild environmental conditions in the mountains of Greece with a little or no destruction of their vitamins and antioxidants.

Corinthian currants are consumed with their dark-colored bark, which is full of anthocyanins and other antioxidants, and has a high ratio surface/mass due to their small grain size. The shell is reach in dietary fibers creating a substrate for beneficial bacteria in the colon, and giving to currants prebiotic properties, thus promoting good bowel function and preventing the biosynthesis of cholesterol.

Corinthian currants are an excellent source of trace elements such as zinc, magnesium, iron and especially potassium. Their content in potassium helps regulate blood pressure much more than other fruits which are considered excellent sources of potassium, such as bananas.

Clinical studies conducted under the supervision of the Department of Nutrition-Dietetics, of Harokopeio University, demonstrated that the bioavailability of micronutrients of raisins exist in the blood as well as great antioxidant capacity.

The glycemic index of raisins is moderate as well as its diabetic, much lower than many other fruits, making the consumption of Corinthian currants suitable even for specific groups of patients. The sweetness of raisins comes from the high content of fructose (35 wt%). In other words, it is a very sweet fruit that does not cause an increase in blood sugar when consumed in normal amounts.

Volunteers who consumed raisins in every day basis had no weight gain, instead a slight decrease. This is probably due to the feeling of saturation caused by raisins, they are rich in fiber, as well as their sweetness.

Published studies made in vitro demonstrated that extracts of currants affect significantly the increase of apoptotic tumor cells in the stomach and colon while research continues with the effect of raisins in other cancer cell lines.

Corinthian currants were administered under proper medical supervision to patients with Diabetes Mellitus Type II and the results showed that consuming a certain quantity does not increase blood glucose, significantly reduces blood pressure and significantly increases the antioxidant capacity of blood.

A clinical study conducted to healthy volunteers-smokers showed that eating a small amount of currants reverses the effect of oxidative stress to which their body is undergoing because of smoking. Oxidative stress is considered as a key factor for the occurrence of serious diseases, such as cardiovascular disease and cancer.

New major clinical studies carried out on the effect of currants on the fatty infiltration of the liver and in atherosclerosis, have shown the excellent effect currants have concerning these diseases. These surveys are prepared for patients with the same syndrome as well as in animal models, in collaboration of Agricultural Cooperatives' Union of Aeghion, School of Medicine, University of Athens, Institute of Biomedical Research of the Academy of Athens and the Department of Nutrition-Dietetics, of Harokopeio University.

These ongoing investigations as well as the previous mentioned, have already been published in refereed journals and highlight the nutritional value of this exquisite product, an ancient dry fruit, a unique product of mountainous Greece with unique nutritional value.

The particular product, as the dehydrated grapes of the homonymous variety, is a natural product which preserves all the ingredients of fresh grapes such as sugars, vitamins, mineral salts, vegetable fibres, antioxidants and flavors.

The product is generally considered as an excellent natural alternative food and sweetener with a perfect taste and aroma. Its sugars, mainly fructose and glucose, are simple sugars (monosaccharide) and it is a precious direct energy source for the human organism (those are sugars of fruits and honey).

It is rich in iron, potassium and magnesium and has high levels of calcium, zinc, manganese and other mineral substances as well as vitamins. It is very rich in vegetable fibres and antioxidants (flavonoids, anthocyanins etc.) and is cholesterol and sodium-free.

It is kept in dry and cool places at  < 18 °C temperature and < 65% relevant humidity free from insects and strong odours.

The raisin paste is produced by dried excellent quality raisins of the "Vostizza P.D.O." high quality variety, selected and processed with the use of the most modern sorting, cutting and pulpifying systems.

The "Vostizza P.D.O" top quality raisin is selected when at full ripeness. The grapestones are removed without however the grapes losing any of its precious elements such as the vegetable fibres or the polyphenols. Thanks to this particular processing method the raisin paste preserves all the elements of raisin without any grapestone or grapestone pieces left in it.

Depending on the customer's preferences a humectant substance may be added such as glycerin, of no more than 5% (w/w).

The product is stabilized by itself due to the low water activity, a property which ensures its longevity.

It is extremely rich in antioxidants, such as anthocyanins and polyphenols, as well as a number of other elements such as vitamins and fibres.

Thanks to the high fructose levels, the raisin paste is of high energy and low glycemic index, which makes it suitable for consumption almost by all people.

This new product is appropriate for industrial use in the bakery sector as an ingredient for cookies and bread or instead of jam. Moreover, as opposed to jam it has neither added sugar at all nor any other stabilizing agent.

The great advantage of raisin paste is that its taste and aroma remain constant and consistent.

The raisin paste is available in different packaging (such as sachets) or various sizes both in the retail and whole sale market depending on the customers' needs.

Currants are available in the following packaging: